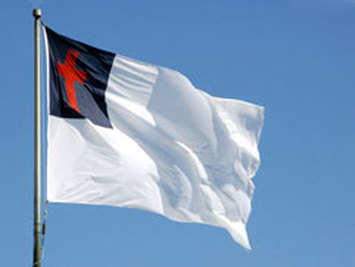 History & Symbolism of the Christian Flag

The Christian flag dates back to an impromptu speech given by Charles C. Overton, a Sunday school superintendent in New York, on September 26, 1897. The guest speaker for the Sunday school kick-off did not appear, so Overton filled in. Spying an American flag near the podium, he started talking about flags and their symbolism. Along the way he proposed that Christians should have their own flag—an idea that stayed on his mind long after the speech. In 1907 Overton teamed up with Ralph Diffendorfer, secretary to the Methodist Young People's Missionary Movement, to produce and promote the flag.

"The Christian Flag, envisioned on September 26, 1897, by Charles C. Overton, signifies Christianity in its entirety-the faith, worship, responsibilities, and all of its other blessings. The cross on the flag symbolizes the Christian religion, God's love for man as exemplifies in Jesus' life and death, and the promise of eternal life. The blue background of the cross speaks of the faithfulness and sincerity of the Saviour, who was obedient unto death. The white portion of the flag is symbolic of purity, innocence, and peace. The white color also bears witness to the purity and sinlessness of the founder of the faith, and man's joy in contemplating God's initiative in redeeming the world" (Our Christian Symbols by Friedrich Rest).

On the Sunday nearest 26 September 1997, the flag celebrated its One Hundredth Birthday. From its inception in 1897 to this present day a full century later, with a proud one-hundred-year anniversary, the Christian Flag has quietly and beautifully graced an ever-increasing number of church sanctuaries, religious schools, national and world conferences, and a host of additional situations. The hallowed flag means much to many people. It belongs. Instinctively it is cherished. Its symbolism, liturgical and ecclesiastical, utters no words, yet speaks to the hearts of millions of believers. Let the Christian flag be known and honoured for what it truly is. Let it be correctly displayed with boldness and pride. Let its colors, Cross and symbolism lift high an expression to the name which is forever above every name, the name of Jesus Christ our Lord.

Pledge to the Christian Flag

The first pledge to the Christian flag was written by Methodist Christian pastor, The Reverend Lynn Harold Hough in 1908, and has since then, been recited by millions of Christians around the world:

"I pledge Allegiance to the Christian Flag and to the Saviour for whose kingdom it stands, one brotherhood uniting all mankind in service and love."

Verses from Sacred Scripture discussing the concept of the Christian Flag

"All ye inhabitants of the world, and dwellers on the earth, see ye, when he lifteth up an ensign on the mountains; and when he bloweth a trumpet, hear ye" (Isaiah 18:3). 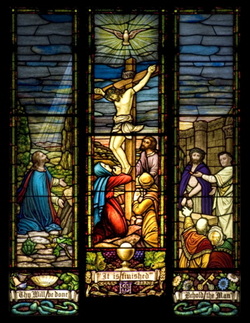