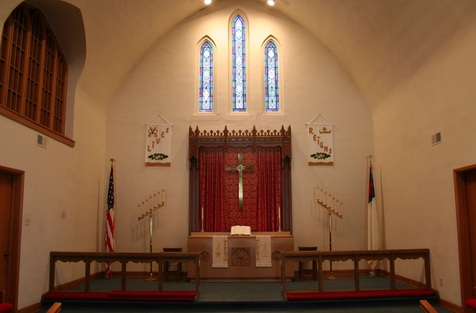 The Christian Flag on the Epistle Side of a Lutheran Chancel

History of the flag code

The code for honourable placement of the Christian flag arose out of crisis. A highly motivated young Methodist clergyman, The Reverend James Russell Pollock, freshly graduated from Yale University was serving  his first full-time appointment. The year was 1938. The clouds of World War II darkened Europe and hung like a shroud over the world. In this setting, an unexpected problem arose for the young minister. To his mind the motto "Christ Above All" and the "Name Above Every Name" meant all honour at all times to Christ and the Cross. With no hesitancy he placed the new Christian flag, which had just been purchased, at his right in the chancel, and the national flag symmetrically opposite. All the laws of heraldry, the Apostles' Creed, New Testament references and social usage designated honour to the right-hand side. He had not anticipated the stir this was to cause. He was approached by some sincere and questioning members. They showed him a pamphlet put out by a patriotic group that pictured the national emblem in the place of honour, whereas he had put the Christian flag in the place of honour. His explanations fell on deaf ears. One of the questioners holding a pamphlet then said to him, "We have the diagrams right  here in print. What do you have in writing?" There was nothing in writing to turn to  concerning the correct usage of the Christian Flag in 1938. Furthermore, the nation was gearing for war. Civilians were flag-sensitive and overreactive. The national and Christian flags were secretly switched during the week. What did he have in writing? At that time, nothing. All he had was a deep conviction that Christ and His Cross should never come second. The young minister took the whole question to his annual church conference. He prepared and presented the written regulations which he felt would comprise a true Christian Code. It was immediately adopted at The Reverend Pollock's Annual Conference, and on 23 January 1942, the Federal Council of Churches had issued a resolution stating that any religious symbol such as the cross or a flag should have "the place of highest honor" in all church displays. 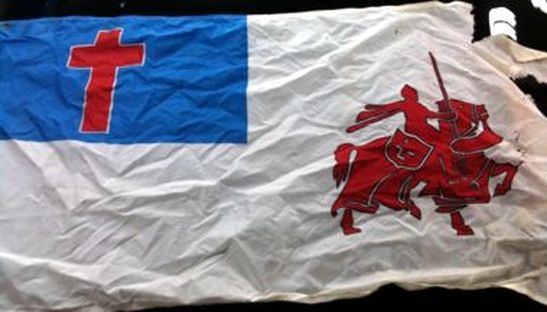